"Our mission is to honor the people who came before us by rescuing, preserving, researching, and displaying the county's rich history to ensure that its significance will be appreciated for generations to come."

THE FOUNTAIN AND TALLMAN HISTORICAL MUSEUM ON HISTORIC MAIN STREET

The Fountain & Tallman Museum is owned and operated by the El Dorado County Historical Society. Built in 1852, it is the oldest building on Main Street and is listed on the National Register of Historic Places.

The museum is located at 524 Main Street, east of Bedford Ave. The building was erected in 1852-1853 and soon afterwards it was the site of John Fountain & Benjamin Tallman's Soda Works.

The museum building style is called rock rubble construction and is a prime example of the first permanent buildings that transitioned Placerville from a mining camp into a town. The walls are two feet thick and the window and door openings had exterior iron shutters to protect the building from fires.

Spring water was carbonated, bottled and sold to the miners. The soda water was an important product as the river and creeks were polluted from mining activities which made that source of water unsafe to drink.

Several businesses have been located here since that time, including Pacific Gas & Electric Company. They owned the building from 1927 -1961 and when selling it made a condition in the deed that the "Old Stone Building " be held as an historic landmark. The Society received the building in 1981 as a gift from Mrs. Fay Rupley Cannon and in 1983 opened it as a Museum. Now known as the "Biggest Little Museum in the West" the building is dedicated to Mrs. Cannon.

The El Dorado County Historical Society was founded in 1938 as a private non-profit organization. It is a volunteer group of generous and dedicated members who are active throughout the county. 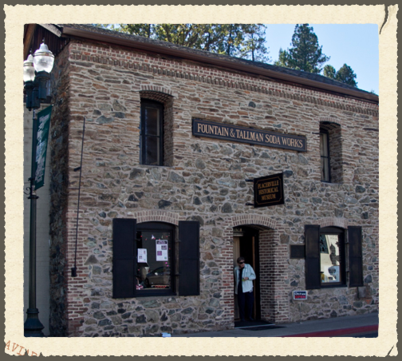