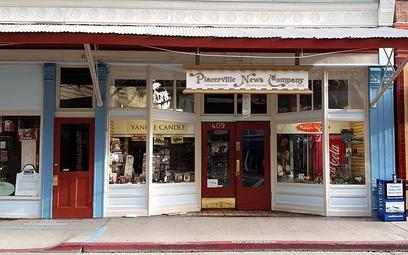 We are a family store, owned and operated by our family since great grandma purchased the store in 1912. The store was almost sixty years on when she bought it and we are currently on our 161 st year of business !!  Next year (2018) will mark 106 years of our family operating the newsstand.

Christine Bayne purchased the store from Mr. Shelley Inch in 1912. She operated the store until  1955 at which point her son George Duffey began his long career in the store, managing the store until 1998. The store is now owned by his daughter Mary Meader and is managed by Mary and two of her children; Jeff and Christine.

The Shelly Inch building is an historic icon all in itself. Consisting of the two original building that were built in 1856 after the great fires of 1855 and 1856 burned the original wood building and any other wood structures in town. These two building are constructed of stacked slate and mansonary. The evidence of the craftmenship involved is clearly visible on the western side of the building. If you stand next to the wall of slate (which is over three feet thick) and look up you will see that the wall is vertical until you reach the top portion, then it slants out and creates an overhang to protect the wall from rain water and other elements.

These two building which stand side by side were turned into one building in 1898 when Mr. Shelly Inch tied the two building together and added the second floor. Mr Inch embelished the facade of the building with an ornamental sheet-metal facade and cast iron storefront components from the Mesker Brothers Iron Works of St. Louis, Missouri. There are very few of these facades left in the united states, and even fewer yet in California.